Free Shipping for Orders Over $100 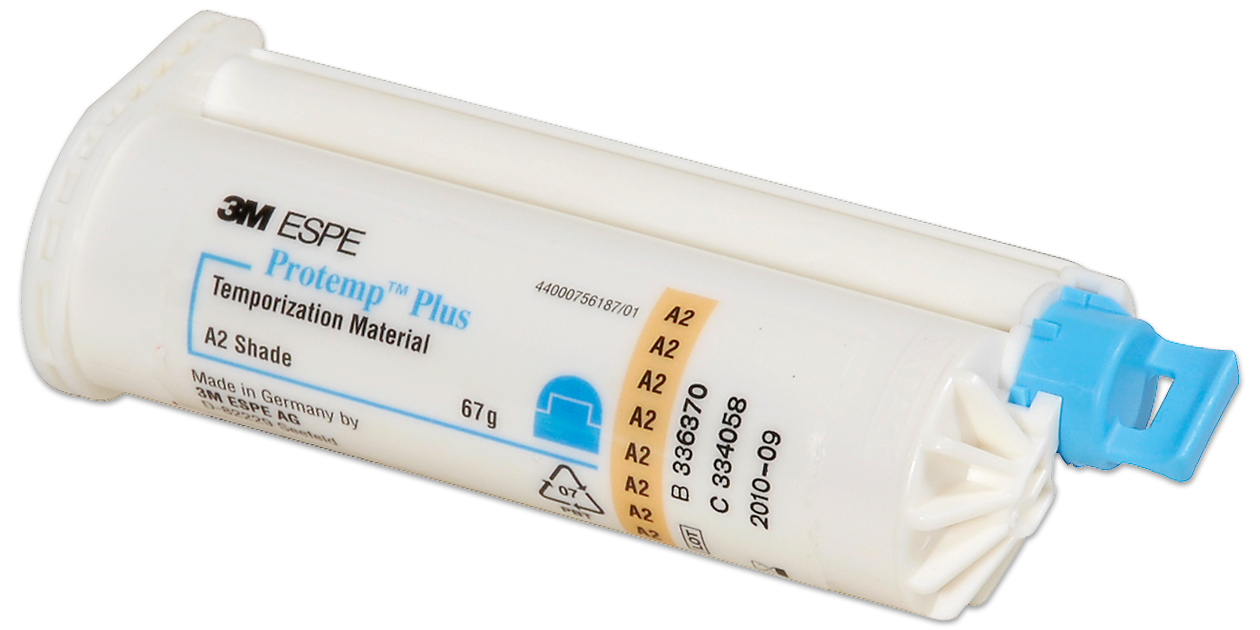 3M Protemp Plus Temporization Material is a two-component composite with a new generation of fillers for fabrication of interim restorations. It is indicated for temporization of single and multiple-unit crowns, bridges, implants, inlays/onlays, and veneers, including long-term provisional restorations.

Eight consultants placed a total of 145 units in 95 patients and recalled them at 6 weeks, 3 months, 6 months, 9 months, and 1 year. Of the 145 units, 108 were single units and 37 multiple units. The multiple units included 10 bridges (three-, four- and eight-unit spans). The single units included crowns, implant crowns and a few inlays and onlays.

45% of the restorations were in the mouth for 3 months only. The reason some restorations were not in function for a year was often the result of patient request, insurance coverage considerations, or dentist discretion. In a few cases the tooth was scheduled for extraction and the Protemp Plus crown served well during this interim period.

At the one-year recall, 51 restorations out of 145 were still in function. Other patients had dropped out of the evaluation before recall due to reasons not related to the restoration. In fact at the completion of the recall, 19 restorations or about 12% still remain cemented in the mouth because patients requested to keep them for now.

Gingival Health: In at least two bridge cases, one four-unit and one eight-unit bridge, the tissues were very inflamed with the original PFM bridge. Upon removal of permanent bridge and placement of temporary bridge, the gingival health improved so much that the patient requested to keep their Protemp Plus bridge.

Resistance to Fracture: Fractures that occurred were observed in the first three weeks. After that time, the restorations performed well.

Resistance to Staining: Some staining was observed in smokers and heavy coffee drinkers, but the stains were easily cleaned and polished at recall.

Ease of Repair: Few restorations required repair, but in general repair was easily accomplished with flowable composites when necessary.

3M Protemp Plus Temporization Material was evaluated as a long-term temporary material over a period of 1 year. It received very good to excellent ratings for all categories evaluated. This product received a 96% clinical rating.

Protemp Plus earned 4.3 stars out of a possible 5.0.
Strengths:
Uncanny high gloss can be created by rubbing unadjusted surfaces with alcohol gauze. Fluorescence, especially B3, is reasonably close to natural teeth. Excellent handling. Seems to be less brittle than the version it replaces.


Weaknesses:
Most shades are lighter than their Vita analogs. Still need to polish or glaze any adjusted areas –merely wiping these areas with an alcohol gauze doesn’t restore the luster. Has the second highest exotherm. Very expensive in cartridges.